REVIEW: ‘Full Bloom’ is Pretty But With Thorns 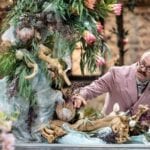 Full Bloom is an HBO Max original floristry competition show by Eureka Productions hosted by celebrity florists Simon Lycett , Elizabeth Cronin , and Maurice Harris . The show’s eight episodes see ten florists competing for a grand prize through two types of contests: short individual designs with a specific flower at its center and team contests to create massive floral sculptures. The structure of Full Bloom ‘s competition is both a blessing and a curse. It distinguishes itself from this year’s other floral competition show, The Big Flower Fight on Netflix, which saw teams of two competing in one large sculpture event each episode. But it’s also a curse. With so much of each episode dedicated to the team contests, you neither have time to get to know the individual artists, their skills, nor their personalities. Additionally, the team aspect adds an awkward dynamic that feels foreign to the nature of forestry work.

There is a lot to enjoy in Full Bloom . The themes of each contest are unique and deliver exciting results. The music and set are mostly enjoyable, and the hosts are dynamic and different from one another. I especially appreciate that throughout each episode, the hosts will do short demonstrations for the viewers about simple floristry techniques that can enhance their own flowers at home. I like how they are as emotive about what they are judging as the contestants are about their creations. Maurice can be a bit too harsh for me sometimes, but that’s more on me than anything.

Unfortunately, there are a lot of aspects that feel like they don’t work. The way each episode works is that the first and second place winners of the individual contests are made team leaders on the large-scale team contest in the second two-thirds of the show. As much as it’s entertaining and beautiful to watch the huge constructions happen, they also leave a lot to be desired from a television perspective.

For one, this format makes it very difficult to get to know any of the contestants. Because so much time is just spent watching them work together and build these huge constructions, from mock shop windows to towering Van Gough recreations, you spend only a fraction of the amount of time with the individual contestants as you would in other shows . This format also leads to an uncomfortable system for eliminating competitors.

Each episode declares a winning team, all members of which are secure for that day. The losing team’s leader then must tell the judges whom they believe was their weakest link to help them decide who should leave. I get that this is a reality competition show, but putting the onus of deciding who to eliminate on the team leaders feels wrong. It seems to be done in part because these team contests are so large it’s hard to tell who contributes how. Or as some contrived means of bypassing showing actual footage of individual contributions since the 45-minute runtime and potentially limited […]

Source: REVIEW: ‘Full Bloom’ is Pretty But With Thorns

Creative Director of Fine Blooms on creating a fine finish

Cofeeto: A Mint Mojito with Coffee