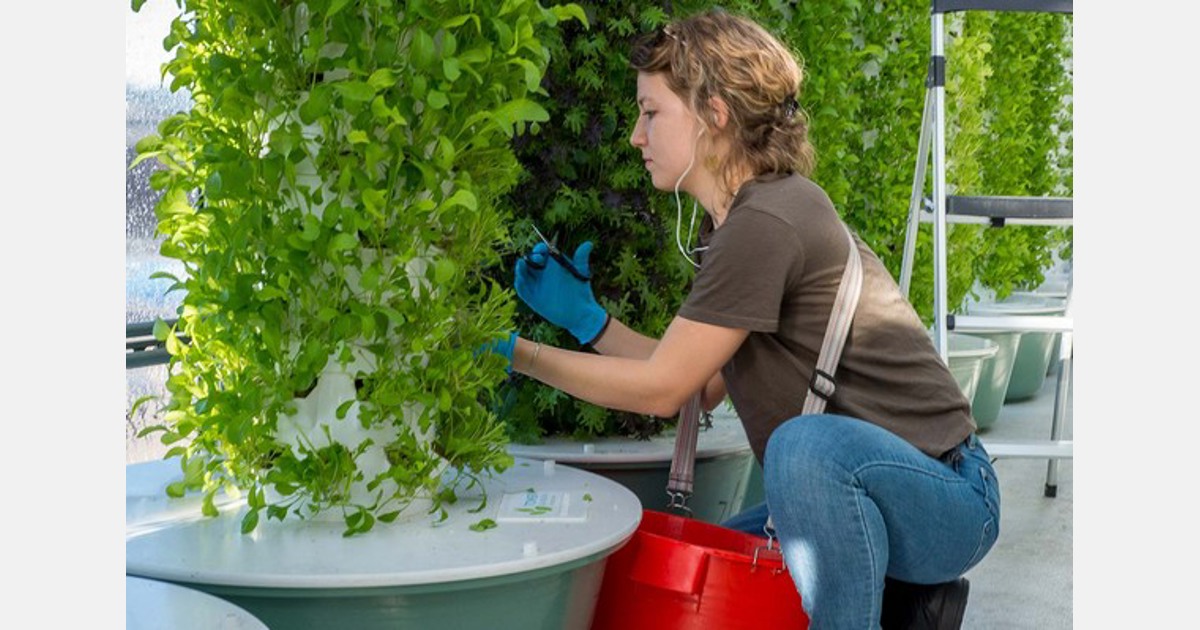 At the corner of 25th and Lawrence, the block is transformed by the verdant visages of edible greens visible through the glass panes of a second-story greenhouse. Inside, a sea of growing towers in an impeccably clean space is surrounded by natural light and dotted with various stages of growth—a spectrum of lettuces, flowers, and herbs, a total of 26 varieties.

This impossible dream draws its life force from the same acreage as the drumming downtown Denver bustle juxtaposed among a concrete landscape. Workers and volunteers quietly tend to and harvest these living things in an ever-repeating rhythm of chores. The soothing sound of water trickling through the growing towers adds to the sense of a surreal sci-fi utopia but belies the struggles that ensue when anyone pushes to place an old concept into a new context.

In this case, that hardworking visionary is Sally Herbert, an Air Force Reserve vet who served in Operation Desert Storm and aims to employ other returning vets as part of her community-minded mission—along with supplying fresh, healthy produce to area markets, restaurants, and her neighbors via community-supported agriculture (CSA) harvest subscription program. Her vehicle is Altius Farms, which has come to represent something more than delicious food; it is the possibility of bridging the gap between rural and urban, rooting a community-based, sustainable food source in the heart of a bustling city and providing access to local, wholesome produce for all its constituents.

The concept emerged when Herbert chose to leave her corporate life in software development and supply chain systems on the East Coast in search of something new. Like so many before her, that adventurous spirit led her west, seeking a meaningful project. At the time, even Herbert didn’t know that project would change how we think about growing food. “Ninety percent of greens consumed in Colorado are grown far from the state and lose vital nutrients and shelf life over the time it takes to ship them here,” she says.

Read the complete article at www.edibledenver.com.