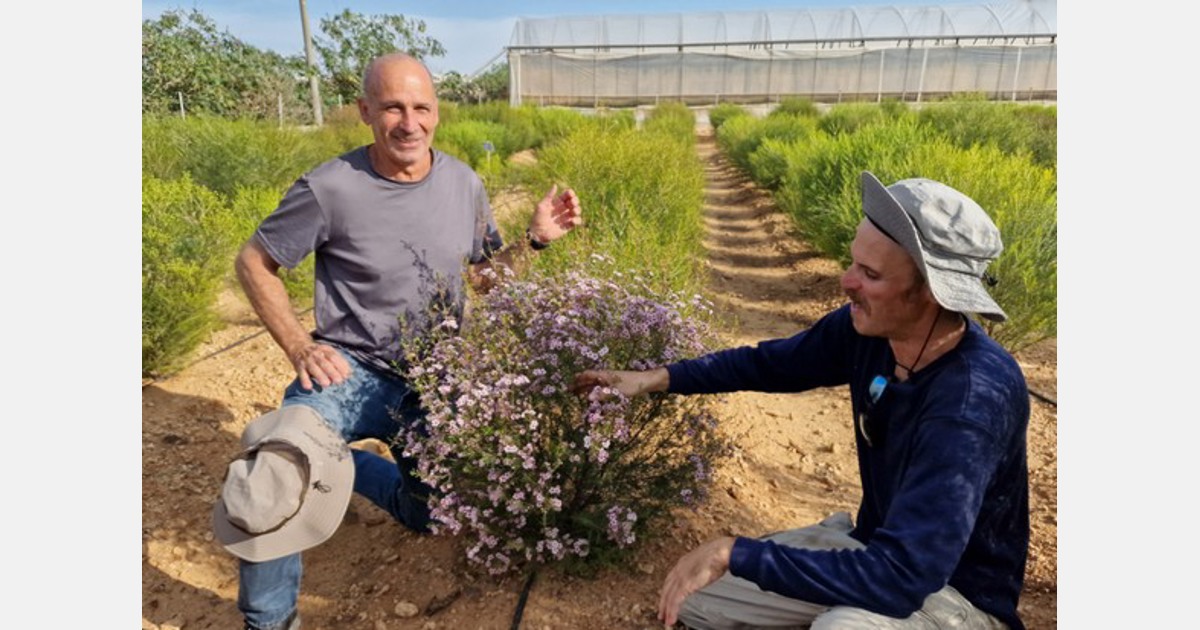 “Chamelaucium – or wax flower – isn’t part of the standard flower market where you’d find things like carnations, gerberas, and hyacinths,” begins Nitzan Nir, director of the Israel-based Nir Nursery when FloralDaily visited their facility earlier this month. “It’s a niche product that we created ourselves. It’s wonderful to use in bouquets and floral arrangements, as well as in  pot and gardening.”

Nir Nursery primarily breeds wax flowers and also propagates them but does not grow these flowers. “Our customers are the growers; they market the flowers. That’s not our goal. We’re a small family business and want to keep it that way. We do, however, help prepare the market by participating in fairs in different countries, such as the IPM Essen. We present the flowers and tell interested buyers from which growers they can source their volumes. There are growers in both hemispheres, so a year-round supply is possible,” says Nitzan.

Air freight export
This Israeli breeder/propagator’s business model is not to sell seeds. It flies plant material to growers in regions like South Africa and South America.” Sea freight isn’t an option; it has to be fast. The planes usually have boxes of 500 plants per box in their hold. You can’t propagate and grow these flowers everywhere. In the southern hemisphere, the best growing conditions are on the line running from Peru across South Africa to Australia. In the northern hemisphere, those are in North Africa, southern Europe, and Israel,” Nitzan adds.

First from California, then Australia
Nir Nursery’s story began in 1965 when Nitzan’s father decided to grow carnations. “Later, he added baby’s-breathe and wax flower. The latter came from California, brought in by professor Halevi, but its genetic material came from Australia, the plant’s native region. Later, I joined the business, and we soon became aware of several companies already working on propagating the plants we had in mind. Often in life, you don’t choose your path; it chooses you. So we decided to change direction and focus on breeding rather than propagating existing varieties. That required less manual labor and more high-tech work. And, 40 years later, that’s still how we do things.”

In the early days, Nir visited Australia several times, establishing partnerships with local breeders. They bought genetic material directly from the source. They would then supply their partners with varieties they developed. “We’ve been a breeding and propagation company for 40 years, and for many years, we’ve not imported any genetic material. In the first decade, we exchanged varieties, but we’ve since mastered the breeding process.” 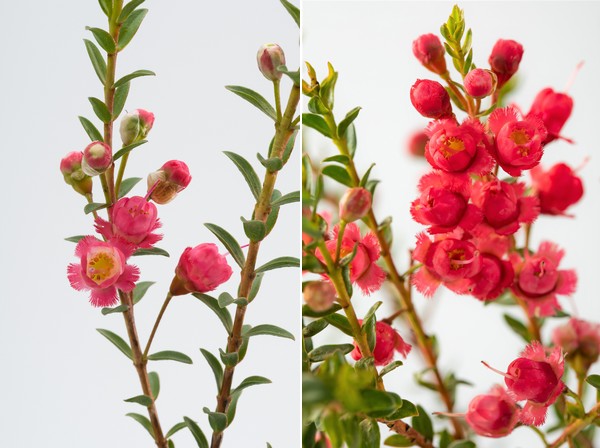 Tricky to breed
The material is bred in every possible manner. It takes about seven years to breed a new wax flower variety. “You can reckon on 15 to 20 years for more ‘sophisticated’ intergeneric crosses, such as ‘Rey'”, he says. “And that, of course, costs plenty of money. Australian genetics are tricky to breed as well as propagate. It’s challenging, but that’s exactly what we want. We don’t want to compete with the big companies; we focus on a niche product. We’ve had good penetration in new markets, for example, the Far East and Russian markets.” 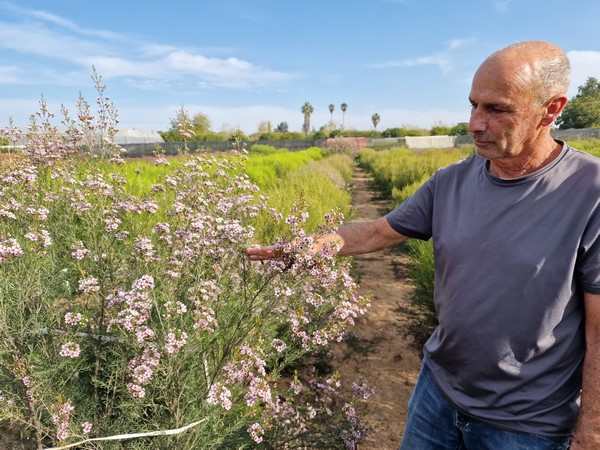 Nir, Ofir, and Jupiter
The company’s first proprietary waxflower variety was – quite surprisingly – named Nir. “Its stem quality is especially good. Our second variety is called Ofir, after my daughter. This flower is doing very well on the market, but Nir is also still selling well,” continues Nitzan.

In 2016, Nir Nursery introduced its first Jupiter variety. It is unique in that, unlike other wax flower varieties, its flowering pattern is concentrated around the stem tip rather than around the stems. This new pattern creates a rich, full-looking branch. “We’re also working on breeding more varieties for the Color Wax line. These are currently available in red, yellow, orange, and green, and we want to offer them more colors soon. To remain relevant, we have to constantly develop new, revolutionary products. In our business, you can’t stay on one good product. People want something new all the time. We’ve even continued developing the Nir variety, improving it over the years to keep it relevant.”

Before, when most of the wax flowers were bred in Australia, they were only exported to Japan, and the west coast of the U.S. “Other continents’ markets were thus ’empty,’ so we developed those. We supplied good products, which increased demand. Our flowers are not only available at florists, but at supermarkets too. These days, the retail sector is essential, also for floriculture,” Nitzan explains. 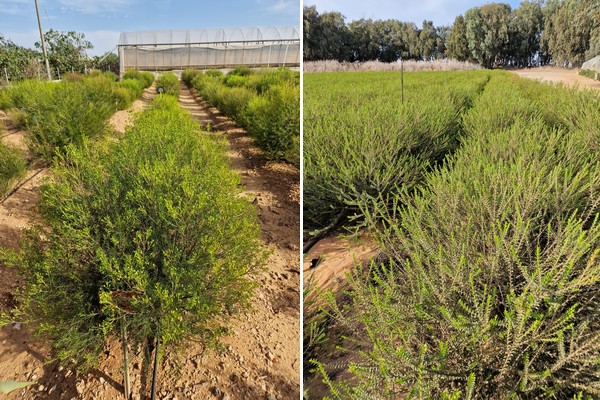 At the trial field

Both hemispheres
The end products of Nir Nursery’s plants are now available year-round, as growers in both the northern and southern hemispheres cultivate the same varieties. “In the northern hemisphere, mainly in Israel, south of the equator, it’s South Africa and Peru. There have also been some projects in Morocco – its climate is excellent and the soil very suitable – but due to various factors, those have since been discontinued. Egypt would be an option too, but Turkey not, because of the frost. With our years of experience, we know that Kenya, Ethiopia, Ecuador, and Colombia are some of the best places in the world to grow flowers. And we now breed varieties that thrive there too.” A peek inside the greenhouse with Wax and Kangaroo Paw pot trials. (Click here for the enlarged picture)

Open Days
For the first time, Nir Nursery is organizing a tour of their facility in Israel for interested sector partners. “In February 2023, just after the IPM Essen trade show in Germany (where we will also be present in Hall 2, Stand 2D43), we invite traders, growers, and buyers from across the globe to our Open Days. We will show them what we have and what’s in the pipeline. In order to get feedback and discover which direction we should take and share agrotechnics ideas. After all, the market’s constantly changing. Twenty years ago, people wanted small flowers, and now larger ones were popular. Since breeding takes time, we want a timely sense of what the future market will look like. That time gap makes market-oriented breeding difficult, but we do our best,” Nir says.

During the open days, he will also show and explain to the visitors that Nir has been growing the same crops on the same soil for 30 years with zero disinfection. “That’s one of our strengths. To rest the soil in the winter, we use organic crops like mustard or rapeseed. They fertilize the soil anew and act as natural disinfectants. We don’t even have to irrigate these either. The winter rainfall provides them with enough water. In the spring, we add compost to the soil and plant again.”

Good demand, but volatile exchange rate
Because of European gas prices, there is less floriculture in the Netherlands, but it seems to Nitzan that that market still wants flowers. “We get plenty of orders, which we can fill. The exchange rate is an issue, though. The shekel is worth almost double what it was a decade ago. That hampers exports, and I can only raise my prices a little. That exchange rate has eroded our company’s profitability in recent years,” he concedes.

Wages in Israel are high too, and there are not many migrant laborers. “Even Thai workers – we employ two – earn what they consider incredibly high wages. Then again, it’s not a labor-intensive crop. One or two workers per hectare are enough. So far, robots – for, say, spraying or weeding – are far too expensive for us compared to the manual labor required. Though I suspect, in the future, the balance will tip toward robotics. We also do open field cultivation, while robots are more easily deployed in greenhouses.”

Unlike the exchange rate, in Israel, water does not pose a problem for wax flower cultivation; it is a relatively drought-resistant plant. “Our intergeneric hybrids require even less water. The markets where our flowers are sold are increasingly facing water shortages, so these flowers not needing a lot of water is an advantage.”

Nitzan says the plants are rarely propagated illegally. “Those who do that are very often discovered; the market’s not that big, after all. They’re shooting themselves in the foot because they will not get the newer varieties from us. As I said, the market always wants new products,” he concludes. 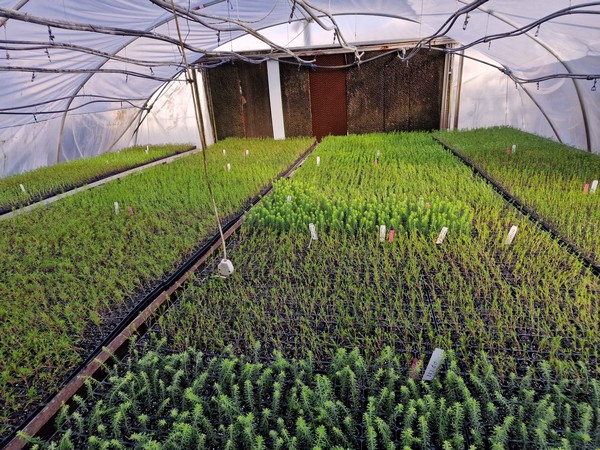 Production: Between 500,000 and a million rooted cuttings a year
Gideon and Nitzan Nir started Nir Nursery in 1983, and Asaf, Nitzan’s son, joined in 2010. It is located in Kfar Hess, about 30km northeast of Tel Aviv. The facility has a combined quarantine system, tissue culture laboratory, advanced propagation methods, trial fields for new varieties, and greenhouses for plants and potted plants. “The plants supplied are of high quality and disease and pest-free. If need be, each new variety has relevant instructions and further advice.” Nir Nursery employs eight people, including agronomic engineers. Annually, it produces between 500,000 and a million rooted cuttings of mainly wax flower varieties.

The next company visit for interested growers is in February 2023. That includes visits to, among others, the cultivation sites and packaging facilities in the Negev desert. All are welcome. To register, please contact Nitzan. See his details below.

NZ: From one bunch to four greenhouses