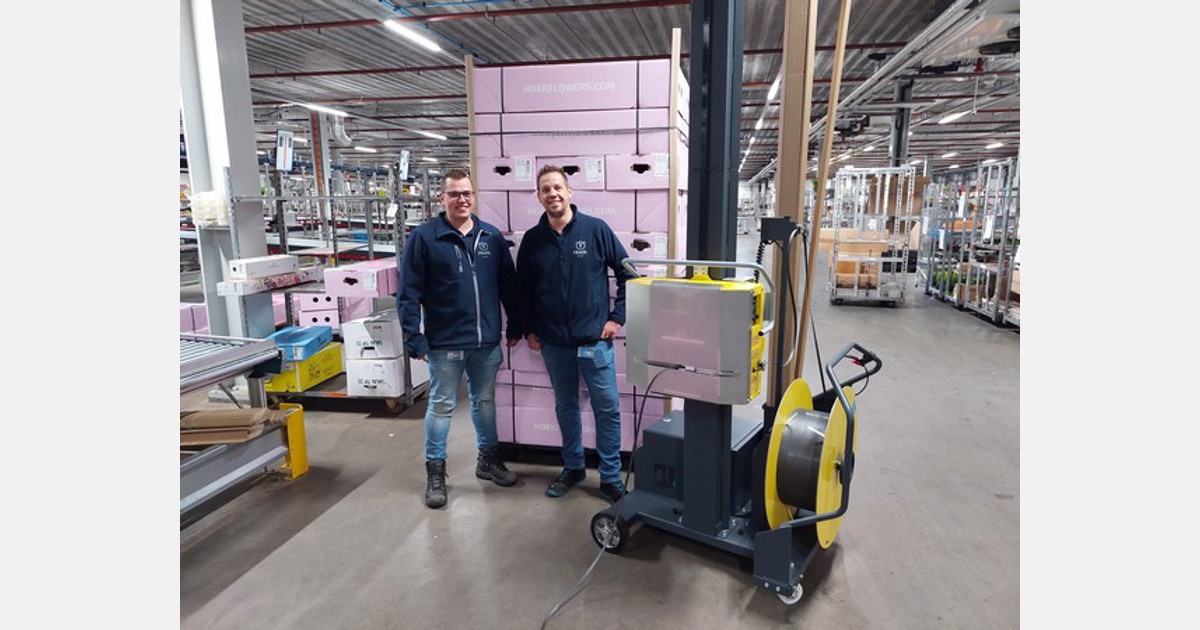 Hoek group has chosen to strap pallets instead of wrapping them with plastic tape. Hoek group is a family company with more than 40 years of experience worldwide. The company is located in Rijnsburg and is engaged in buying and selling flowers and plants. Nowadays, a lot of flowers are packed and transported in cardboard boxes on pallets to their destination.

Strapping band instead of plastic tape
Hoek group is one of the early adapters in the flower business with an automatic internal transport system. The boxes with flowers are transported via hundred meters of conveyor belts through the company. Many of these flowers are packed in cardboard boxes so that they are not damaged. Then, these boxes are stacked on pallets. Previously, these pallets were secured with corner slats and plastic tape. However, this doesn’t work well according to Dennis of Houk group: ´The plastic tape will stick to the boxes, damaging the barcoding and appearance of the box when the tape is released.’

Furthermore, according to Marco of Hoek group, the plastic tape is not strong enough: ‘The plastic tape doesn’t fit tightly around the pallet and has too little bearing capacity. This makes pallets unstable during transport’. To solve these problems, Hoek group has opted for two Reisopack 2830 strapping machines of Steenks Service. This makes Hoek the next company in the flower and plant industry that moves away from using plastic during the logistical process.

Mobile strapping machine in the hall
The Reisopack 2830 is a semiautomatic strapping machine that can move around the hall. The packaging line at Hoek group has different exit points. At every exit point are multiple pallets that need to be strapped. The Reisopack 2830 can move easily from one exit point to another to strap the pallets. The pallets can be transported in a safe way when they are strapped. The Reisopack 2830 is ideal in this situation, according to Wouter from Steenks Service: ‘It is easy to move the machine near the pallet, after which it can be strapped manually. A pallet with 4 corner slats and 3 straps can be strapped within 55 seconds.’