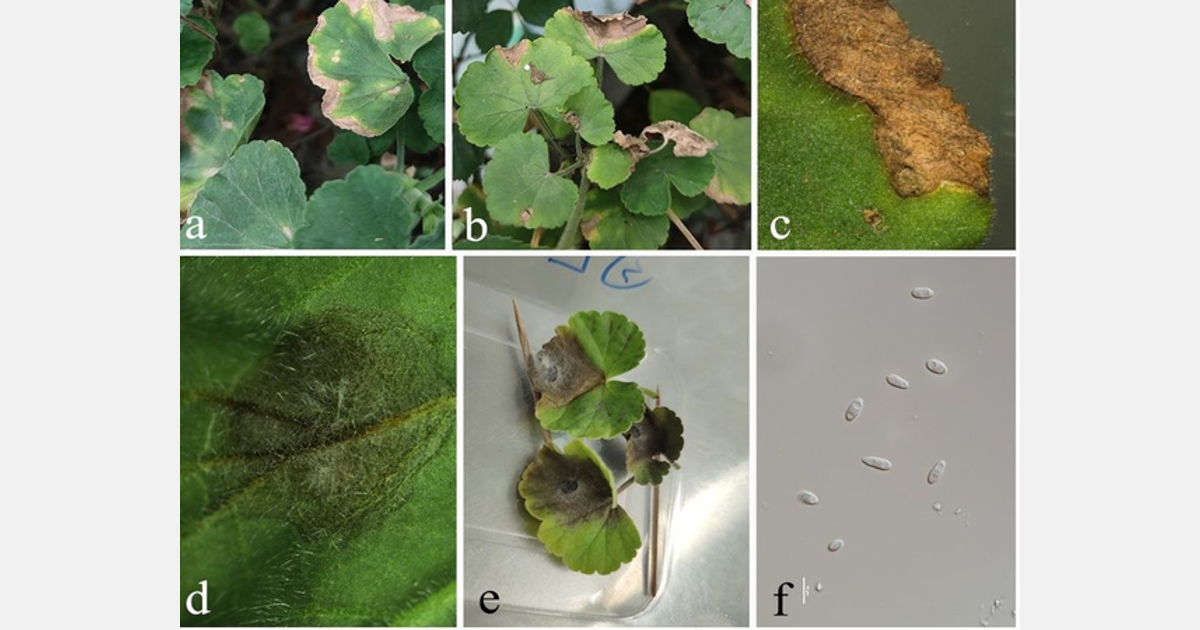 Garden geranium (Pelargonium × hortorum L.H. Bailey, Geraniaceae) is a popular ornamental plant cultivated worldwide, whose extracts are used in cosmetics and medicine (Jugulam et al. 2001). On the University of Electronic Science and Technology of China campus (Chengdu, China), leaf blight on the garden geranium was observed in April-September 2021. The average disease incidence was around 40%–50%, which caused severe loss of ornamental value. Initially, circular, brown necrotic areas appear on the margin of the leaves. In the advanced stage of infection, lesions may enlarge rapidly and become irregular in shape, with the central portion of the lesion falling out and defoliation. To isolate the pathogen, symptomatic tissues obtained from diseased leaves were surface-sterilized for 1 min with 0.3% NaClO, rinsed in sterile distilled water, and plated onto potato dextrose agar (PDA).

The inoculated plates were incubated for 7 days at 25°C. Successively, pure cultures were obtained by transferring hyphal tips to new PDA plates. A total of 20 isolates were obtained across 25 garden geranium plants investigated. The colonies on the PDA plates reached a diameter of 60–70 mm after 10 days at 25°C, spreading with a regular margin, aerial mycelium white and black mycelia on the undersides cottony and solitary and globose pycnidia were produced after ten days. Conidia were either cylindrical or shortly cylindrical, hyaline 4˗11 μm × 2˗5 μm. These morphologies corresponded to those of Stagonosporopsis species. Sequence data for the 28S nrDNA, the internal transcribed spacer, β-tubulin, and RNA polymerase II subunit (White et al. 1990, Liu et al. 1999, Aveskamp et al. 2009) were obtained randomly for one of the pure isolates (P1-L4-1-L1-1), which resulted in the GenBank accession numbers ON667723, ON667722, ON677462, and ON677463, respectively. The RAxML analysis (Stamatakis 2014) of the combined sequence data of the isolate P1-L4-1-L1-1 and the reference sequences obtained from GenBank demonstrated that the isolate P1-L4-1-L1-1 formed a strongly supported clade with the type isolates (C5-5) of Stagonosporopsis citrulli M.T. Brewer & J.E. Stewart, which has been found on cucurbits (Stewart et al. 2015).

The procedure for Koch’s postulates was followed to confirm fungal pathogenicity using 4-day-old mycelial disks. A total of 15 same-aged healthy leaves were divided into three groups, and each group received a different treatment. Artificial wounds were created on one group of leaves using a sterile pin, and a 5-mm mycelial plug of the fungus was placed on the injured tissues. Mycelial plugs were also placed on the surfaces of the sets of unwounded leaves. The remaining leaves were maintained as control and inoculated with sterile PDA plugs. The test was repeated three times. Both the wounded and non-wounded leaves exhibited symptoms after 4–9 days identical to those observed in the field. The control group remained asymptomatic, and the morphology of the fungus reisolated from the inoculated leaves was similar to that of S. citrulli. The phylogeny, together with morphological identification and inoculation results, confirmed the identity of the pathogen on garden geranium as S. citrulli.