Yellow woodsorrel (Oxalis stricta), also known as oxalis, is one of the most common broadleaves weed species in greenhouse container production. It is an annual weed species in cool climates, such as the northern United States, and a perennial weed in warmer regions. Oxalis is native to North America and is widely distributed throughout the world, including the eastern and central United States, Europe, Africa, Asia, Japan, and New Zealand. It is difficult to control because oxalis can spread by rhizomes, stolons, and by seeds that have no dormancy requirement.

Habitat: Oxalis naturally grows in woodlands, grasslands, disturbed areas, and turf. It can be found growing in the drain holes of containers or on the surface of container media in nurseries and greenhouses under full-sun and partial-sun conditions. Oxalis can also be found growing in side-walk cracks, alongside trails, flower beds, lawns, cultivated fields, and even in container nursery stock.

Growth Habit: Oxalis is herbaceous and usually grows upright with extensive branching but may also grow prostrate along the soil surface (Lollar and Marble, 2015). Branches or unbranched stems
arise from fleshy rhizomes in the soil or substrate. The underground rhizomes can overwinter depending upon the severity of the weather. The plant height ranges from 6 to 20 inches.

Seedling: The cotyledons have a pinkish tint with alternate trifoliate leaves. Leaves are very thin, herbaceous, with three heart-shaped leaflets. The upper surface of the leaflets is smooth, while there is minimal pubescence (hair) on the lower leaf surfaces and margins.

Roots: The taproot is the main root system of this plant. The rhizomes can also form secondary fibrous root structures.

Shoot: The stems are soft, herbaceous, and light green with slight pubescence (hair). The leaves are alternate, palmately compound, light green in color, with smooth margins and heart-shaped leaflets.

Inflorescence: The inflorescence is an open-branched cluster of 2 to 5 long-stalked flowers. The flowers are bright yellow with 5 petals. They are approximately 0.5 inches in diameter and bloom from spring through fall.

Seedpods: The fruit of oxalis are in the form of capsules that resemble the shape of okra pods. The capsules have 5 ridges and are approximately 0.5 inches in length. The seedpods, which are produced from the spring through the fall, explosively burst when touched, thereby spreading seeds out rapidly up to 16 feet away from the parent plant (Neal and Derr, 2005).

Seeds: The seeds are very tiny, teardrop-shaped, and brown. A single oxalis plant can produce up to 5,000 seeds per year and have an almost 100 percent germination rate immediately after dispersal (Holt and Elmore, 1985). Oxalis seeds require light for germination, and the optimum temperature requirement for germination ranges from 50°F to 84°F; however, seeds have a broader germination temperature range when produced in warmer months than seeds produced during cooler months. 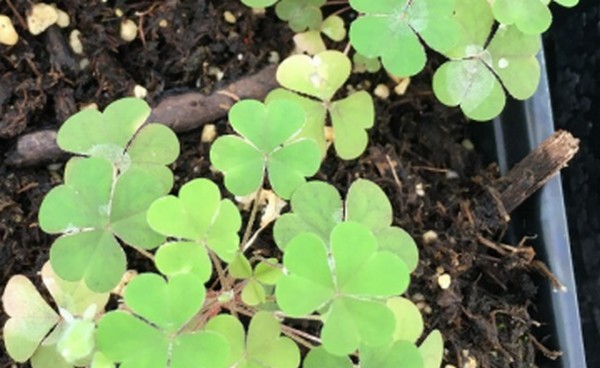 Physical and Cultural Control:
Sanitation is one of the most effective methods to control oxalis in
greenhouses. Growers need to regularly check all the incoming liners and plants for oxalis before placing them in containers and regularly scout for this weed in both crop and non-crop areas. Oxalis can propagate from cut rhizomes and stems. Therefore, mature oxalis should not be rototilled. Growers can achieve the best control by hand weeding young oxalis plants before the seed capsule development (usually 6 weeks or younger). According to Halvorson and Guertin (2003), hand weeding should be done when soil is moist to avoid displacing small ornamentals and to ensure that all vegetative portions, including roots and rhizomes, are removed. The use of a shallow layer of organic mulch can also reduce oxalis populations by blocking the light required for germination (Holt and Elmore, 1985).

Chemical Control
Preemergence control: The only preemergent herbicide that can be used in a greenhouse or a fully enclosed structure is indaziflam (Marengo). Indaziflam also provides some control on emerged oxalis until the four-leaf stage (Marble et al., 2013). Indaziflam needs to be applied as a directed application, avoiding contact with ornamental foliage.

Early Postemergence control: There are several postemergence herbicides that have shown successful control of oxalis in the field or outdoor container production. According to Saha et al. (2018), edoxaban (Gallery), dithiopyr + isoxaben (Dimension + Gallery), dithiopyr (Dimension), and prodiamine + isoxaben (Gemini) have
shown acceptable (> 80%) control of oxalis during its earliest growth stages: from cotyledon up to 6 leaf stage. Whereas indaziflam (Specticle) has shown excellent control until the oxalis plants have 12
leaves. Other herbicides that have shown significant early postemergence control of oxalis are sulfentrazone (Dismiss) and
flumioxazin (Sureguard). However, none of these postemergence herbicides are labeled for use in a greenhouse or other fully enclosed structure.