Can stone wool be used in propagation? 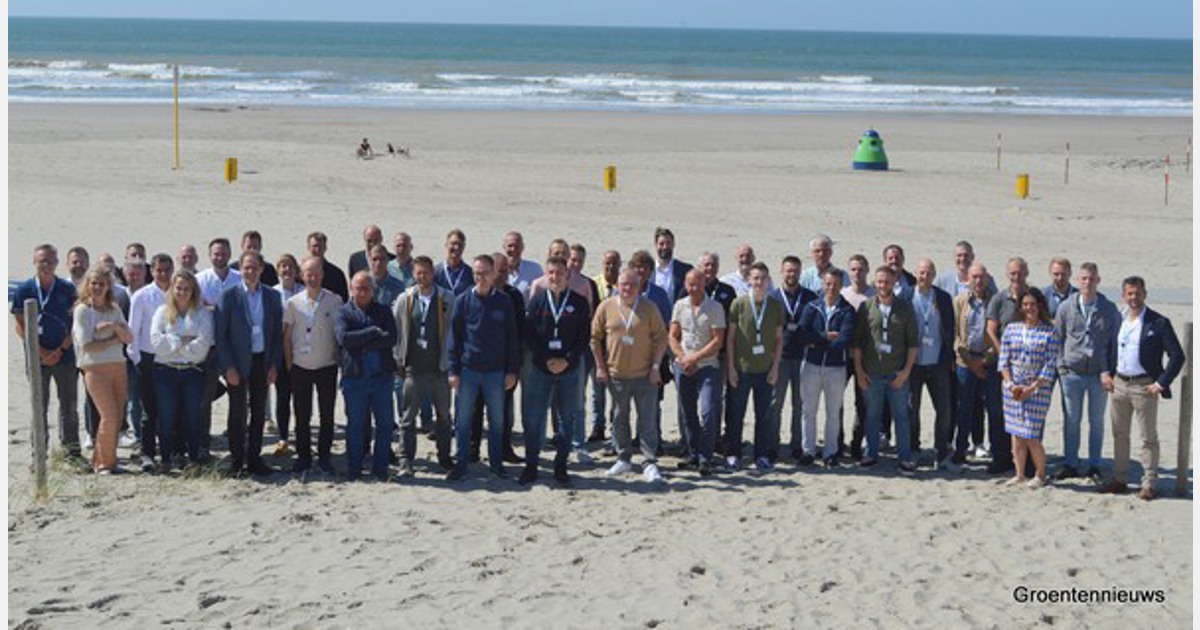 Last week, plant breeders and speakers considered the brighter side of things at the beach in the Netherlands. Yes, there are plenty of problems and challenges these days, but perhaps because of this, opportunities abound too. About 50 plant breeders heard about these during the seventh edition of the Grodan Plant Breeders Day.

It was held at the Zomertijd Strand Pavilion. After the theoretical part, it was time for some action. A tradition during the plant breeders’ day, which has included some ‘dangerous’ driving on a racing circuit. This time the participating ‘stone woolers’ could let off steam by doing a bit of archery, playing some beach soccer in inflatable balls, and trying their hand at kite-flying. These photos will give readers an idea of the activities.

Opportunities
But, before the fun could begin, the breeders listened to presentations by Joyce Rasquin, Thomas Peters, Ben Nikaj, and Joost Haenen on behalf of Grodan. Professor Leo Marcelis of Wageningen University & Research spoke about vertical farming, and Mario Helderman gave the opening speech.

He explained that the pandemic had hindered the planning of this latest edition of the Plant Breeders’ Day. Mario added that he did not want to dwell on that. All the energy and virus problems facing the breeders were to be put on the backburner for a moment.

Grodan wanted to focus on highlighting the opportunities, including new crops. Business Development Manager, Joyce Rasquin, explained how the stone wool company intends to keep challenging itself by trying to improve existing crops such as tomatoes, but also by looking for new breeding opportunities. A list of crops from the United Nations’ Food and Agriculture Organization was used as a basis. 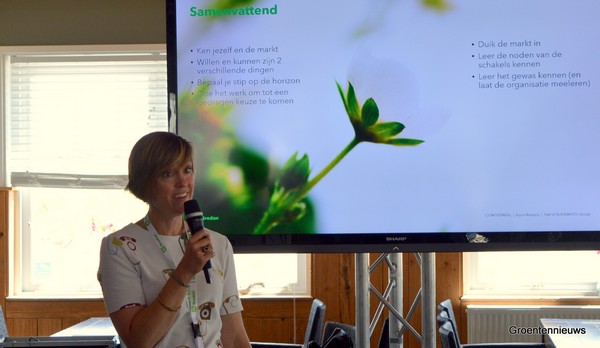 Focus on lettuce and strawberries
Joyce, sheepishly, admitted that the list included crops she and her colleagues did not recognize. A quick google search then provided the answer, and plenty of the crops could be ticked off quickly. But, just as many remained. For those, Grodan asked itself several questions. Is the crop valuable and large enough worldwide? What role do high-tech greenhouses play in it? And what is the crop’s current substrate situation?

This selection process led to a focus on lettuce and strawberries as new crops, where Grodan sees opportunities for stone wool propagation. Despite both crops’ cultivation being quite complex, Thomas explained a little later. Lettuce, for example, has many different growing systems. And strawberry cultivation has a whole range of different cultivation strategies.

Bizarrely complex
Fellow business developer, Thomas, says he has been working full steam ahead on new crops for the last two years. He enthusiastically shared that lettuce and strawberry are both “bizarrely complex.” Thomas says he could “talk about it for hours,” so he explained about strawberries first and then a little about lettuce cultivation.

As mentioned, growers use many different cultivation systems. Grodan limits itself to horizontal hydroponic farming, which is also done in many different ways. Such system differences are challenging for the stone wool producer, as are the various growing and irrigation methods and all kinds of lettuce varieties.

“Were I a plant breeder, I’d be well aware of everything,” says Thomas as he begins talking about strawberries. He introduced the audience, made up mainly of vegetable fruit and ornamental plant growers, to the ‘runners’ concept (simply put, a strawberry plant that becomes a cuttings-producing plant after harvesting).

He told them that today’s strawberry growers lead their vegetable fruit counterparts in at least one respect: flower research. All strawberry plant growers have such studies done on batches they supply. These independently establish what a plant can produce, preventing discussions later. 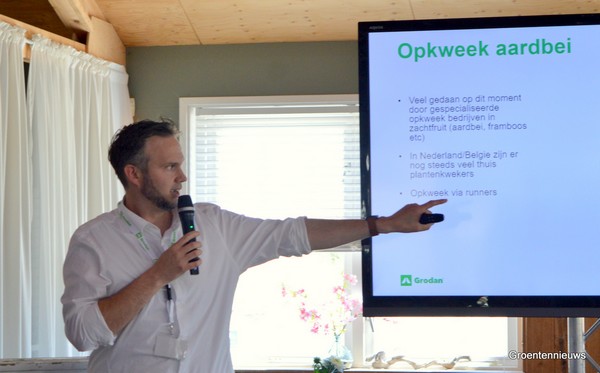 Not needed anymore?
Thomas’ presentation and that of Leo’s made some guests question whether lettuce and who knows what other crops’ propagation on stone wool might negate the need for specialized growers. After all, more and more growers are setting up (multilayer) cultivation. Thomas and Leo both answered that.

Thomas expects the larger multilayer growers to, indeed, take lettuce growing into their own hands sooner or later. But, that is still difficult for smaller companies that still struggle with plant quality. Therein lies an opportunity for the specialists present, Leo indicated. “Ensure that, as a nursery, you outdo them. You wouldn’t allow yourselves to become redundant, would you?”

Leo’s presentation showed how plant breeders could distinguish themselves. He told a story about vertical farming, which led to him talking about lighting. He mentioned the terms far-red and blue light. By playing with light, plant propagators can steer their cultivation. “Are vertical farm products always better quality?” asked an audience member. “No,” answers Leo, “not necessarily. Growers in vertical farms, too, always have to choose: volume or quality. It’s true, however, that if growers light a crop more, they can achieve both.” 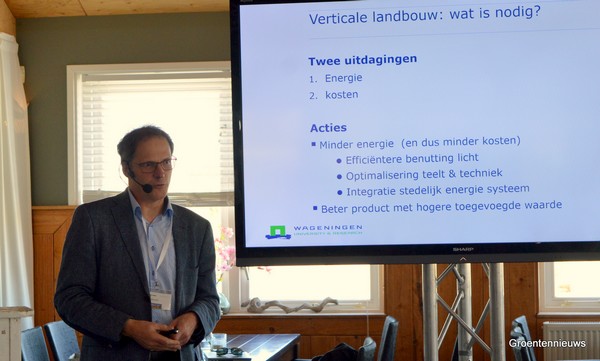 Ben Nikaj, a senior consultant for Hi-Tech Indoor Greenhouses, discussed medicinal plants. This is another new crop that offers opportunities for nurseries, he says. Stone wool gives these plants a clean foundation because of factors, including the product’s inert property. Currently, this crop is often propagated through cloning or tissue culture.

Ben estimates that, within the next ten years, there will be enough good seeds on the market, which will also benefit propagation companies. The market for medicinal plants is going to professionalize even more. That should lead to further separation between growers and nurseries. 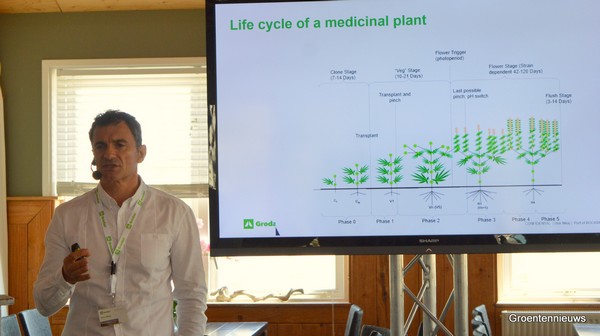 Novelties
Joost had the last word during the presentations. He presented the new version of the root zone sensor Grodan GroSens. He also talked about the challenges stone wool must overcome to grow pesticide-free crops by 2030 and the Funnelplug. Grodan sees opportunities for this plug now that vermiculite, according to Joost, is hard to come by. It has some disadvantages in cultivation too. With the plug, the plant propagators can do away with scarce raw materials.

An opportunity, but with challenges too. For example, seeds must be placed right at the bottom of the deeper, narrower plug to germinate properly. Grodan continues to research this. Joost, therefore, advised the audience to certainly use this new plug but not to switch over entirely at once. The same applies to the GroSens. “Without a sensor, you’re blind,” Mario adds. “Then you’re relying on non-structural measurements from your stone wool block.”

During Ben’s presentation already, there was a brief off-topic discussion about beer – medicinal plants show similarities to hops, which are used in beer. But, by 4 pm, it was, indeed, time for a real beer or another beverage. Only one, at first, because there was still some beach fun to be had. 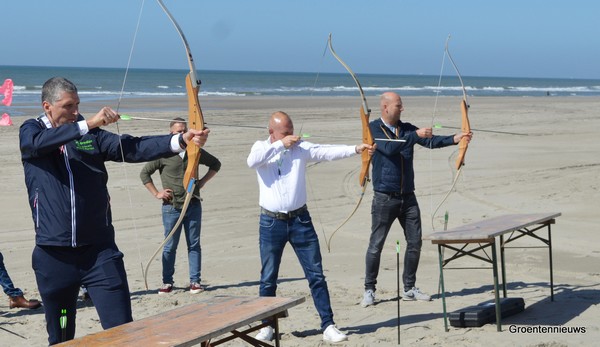 See all the action photos here.